The Nii~-li~ (Smith River) is designated as a National Wild and Scenic River which is a federal designation designed to grant protections from development that substantially changes its wild and scenic nature. For generations, the Smith River holds the record for the largest steelhead caught in any California river system with salmon caught weighing up to 65 pounds. Travelers come from across the world to fish in the great waters of the Smith. The span of the river stretches through the Six Rivers National Recreation Area and borders Redwood National and State Parks.

Lhuk (salmon) and its importance to Tolowa Dee-ni'

Lhuk have an essential role in our ecosystem and in our way of life. Lhuk have been a symbol and a necessary component of the first peoples who called the Pacific Northwest home. For thousands of years, lhuk shaped the lives of the people Tolowa Dee-niˈ, who have lived here since time immemorial.

Lhuk is what some consider to be an indicator species, meaning if water is contaminated or running low, fish populations decline, then so too will elk, deer, berries, and other resources that sustain us as Tolowa people. SalmonLhuk continues to be an essential product of our nutritional health and overall diet, it is often served at tribal ceremonies and cultural events. Fish are one of the traditional first foods of Tolowa people and have provided much subsistence.

Fishing for lhuk is just as important an aspect of tribal culture as consuming it. For many, the practice of fishing helps one's appreciation of the land, the waters, and the animals we eat. Fishing, in general, has been an essential part of the economies of this region for thousands of years, from trade routes to modern-day commercial fishing.

Fish also play an essential role in our ecosystem by returning ocean nutrients to the rivers they call home. The annual lhuk return and its celebration by the Tolowa assure the renewal and continuation of humans and all other life. Lhuk and the rivers they use are part of our sense of place as Tolowa Dee-ni' people. The Creator put us here in this exact location where the lhuk return each year. We are indebted to remaining in the Center of the World and protecting this place and the fish that connects so many of us.

The Lhuk Rite Ceremony signifies the importance of lhuk and all living things we harvest and live amongst as Tolowa Dee-ni'. It once was an annual ceremony that all local tribes performed.

The Ceremony's purpose is to pray for a plentiful harvest. The Ceremony would happen before any fishing or harvesting by the local tribes. It is vital to recognize lhuk and the practice of harvesting that has provided our families with healthy substances since time immemorial.

Traditionally the Lhuk Ceremony was attended only by adults over the age of eighteen. It began with the catching of the first lhuk in the spring from the river. This lhuk is filleted into halves and cooked on a pair of redwood stakes over a fire. After cooking, the headman would share a prayer. As part of the ceremony, after the prayer, ten male participants get a small mixture of lhuk and angelica root placed into their mouths. The men dive into the river, spit the sacrament out into the water, and emerge to clap their hands for luck. While still in the water the participants shout Das-'aa-t' xwvsh-nish-le (long I shall live) and Lhuk shee-yi (lhuk I got), is on!

Historically, runners were then sent to the north, south, and east when the ceremony was complete. The runners would notify other nearby villages that the river and land were now open for harvest. 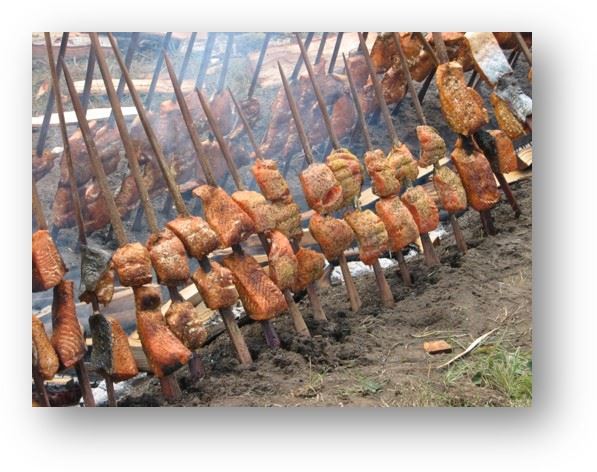